Babies are born as social and emotional beings already 'programmed' to absorb the interactions of loving parents. With every moment of interacting, babies are learning to anticipate parents' consistent and predictable actions, which build on the their sense of security and self-confidence, and ultimately their secure attachment (see Bonding and Beyond → Infant Attachment). So parents' sensitivity and gradual introduction to the world in which they live support babies' emotional and social well-being.

With such nurturing babies also develop a sense of trust within the first year as described in the theory of psychosocial development devised by Erik Erikson. Without parents' qualities of sensitivity and consistency of caregiving, babies can develop feelings of mistrust resulting in a fear of their environment and those around them. So a baby is learning which people (other than Mum/Dad) are caring or threatening, funny or dull and what situations present to be safe or scary. Furthermore, the positive partnership that your baby forms with you is the root to his development of emotional and social competency into childhood.

Below is a general guide to babies' social and emotional development within the first year:

Note: Scientific findings have shown that what used to be thought of as 'babies having wind' when they show pursing of their little lips is actually the development of a smile!!! This smile then progresses to babies showing their delight at being in the company of Mum/Dad during loving interactions. 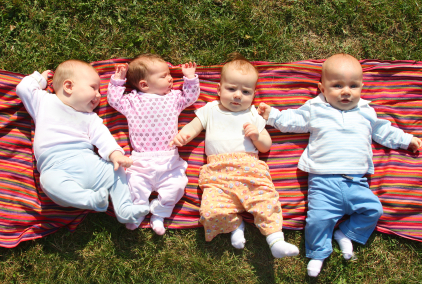 Babies in a group situation at this age (and further developing in the following months) are also starting to show signs of their enjoyment in being sociable together. I have watched with great delight as babies in small groups play on the floor, reaching out trying to touch hands and look at each other, and then begin to 'talk' to each other. Babies are truly 'programmed' as social little being. (See the difference in development of the younger baby second from the left in the photograph to the others - it shows how much overall development occurs within a few months.)

By now they know what they want but may not have the physical capability to achieve it or the language skills to say what they want. Despite the outbursts of frustration, their vocal cheerfulness is all part of fun-loving development indicating they are now showing social and emotional competence. This stage also sees babies learning to imitate social actions e.g. waving 'bye-bye' and blowing a kiss.

During this stage, babies are developing stranger anxiety - showing their awareness of unfamiliar people. Baby may show distress at an unfamiliar adult paying attention to her, or could for example, be frightened by someone wearing spectacles if she hasn't seen this before. Research suggests that such reactions show babies can sense possible danger, which becomes a protective element for their own wellbeing. By showing distress/crying they are alerting their parents that they are frightened and need protection. Eventually babies become familiar with the world around from the supportive social experiences parents provide (such as meeting with other parents and babies, going on outings).

Separation anxiety from parents (especially Mum if she has been primary caregiver) can also start during this later half of the first year and can continue into the early years. During the first 6 months, you and Baby have developed a secure, loving partnership and when you are away from her she may feel insecure causing anxiety so she becomes distressed e.g. Baby begins daycare in an unfamiliar environment and with a carer whom she has not yet developed a feeling of trust. However, through repetition of gradual separation from you, and with consistent sensitivity of the carer, Baby will develop a sense of trust, which will relieve her anxiety.

A general guide to babies' social/emotional development during the first year: